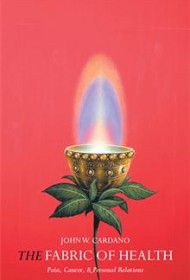 In 1970, John Cardano’s job was intercepting and translating North Vietnamese communications from a mountaintop support base in the Demilitarized Zone. During an intense 70-day mortar siege, he was injured in a mortar attack that left him, at age 22, with head to toe shrapnel wounds and the incurable pain of extensive nerve damage. Much of The Fabric of Health is dedicated to his odyssey as he learns to use body, mind, emotion and spirit to improve his situation.

In vivid detail, Cardano describes the explosion that instantly transformed his life to one of medicated pain control and unresolved emotional anguish. Thirteen years later, newly divorced and engulfed in dark energy, he realized he would have to take responsibility for his own recovery and began searching for healing paths outside of traditional medicine.

Chapters about physical healing form the core of his narrative, but building on a base that includes Reiki, acupressure, Taoism, Hinduism, Native American spirituality and even quantum physics, he introduces the final spiritual component of his tapestry. During an extended visit to Thailand, he studied the Buddhist practice of Vipassana meditation and learned the ways stress, tension and unresolved emotional issues contribute to disease, and he created ways to address them with conscious awareness.

With the exception of some ponderous introductory chapters, the author skillfully shares what he has learned. He’s at his best when telling his own story and letting readers discover the truths that unfold: Inner clarity comes from listening to intuition; health problems are symptoms of unresolved issues that fester over time; in harmonious environments we can regenerate healthy new cells that also contribute to a healthier society. He builds to a beautiful, hopeful ending as he breathes in the energy of the night sky, “the energy to be, to create, and to evolve.”

Seekers of all types, but especially those exploring spirituality as a way to cope with illness and pain, will find his book an inspiring tool.