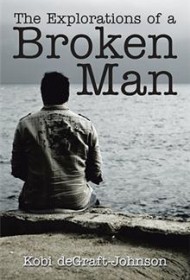 In The Explorations of a Broken Man, author Kobi deGraft-Johnson juggles romance and criminal activity in a story told through numerous flashbacks.

Anthony is a loner in the vein of Jack Reacher, skulking around town and chain smoking until he meets Floretta, a potential love interest. Before things can heat up between them, he runs into Alex Simmons and is reminded of a past linked to a crime syndicate called Deafening Silence and to Isabella, the love of his life who turned out to be an assassin. Suddenly faced with hard choices and irreversible losses, Anthony must act while forced to choose between redemption and destruction.

The raw materials for a solid thriller are all here, but deGraft-Johnson loses sight of the action-oriented ingredients that are most important to that formula. Deafening Silence is a crime syndicate, but we never see its members committing crimes; the group’s business is hastily summed up only near the end of the story as “Drug marketing, weapons smuggling and business embezzlement.” Without any sense of how bad the bad guys are, the stakes remain low throughout the book.

Other issues impact enjoyment as well. A flashback ends up being inadvertently funny when “Anthony’s uncle” is never given a name; when he dies heroically, Anthony is left shouting “Uncle!” as if someone were twisting his arm. Overuse of the passive voice (“Whilst walking, Anthony was asked, ‘Who was that?”) and lengthy descriptions of the weather or vague characterizations and statements (“The stranger almost felt he had connected with Anthony with the words he had received from him.”) that could be better shown through action make for slow reading.

The Explorations of a Broken Man could be retooled and polished into an engaging thriller. As written, however, it’s an admirable effort that never fully pays off.