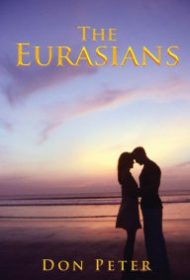 Betrayals, deception and corruption drive The Eurasians, a novel that mostly takes place in and around Malaysia beginning in 1964.

In the book’s opening scene, British soldier Aaron Johnson is wounded while assisting Malaysian soldiers in battling Indonesian troops. Elsewhere, Mei Ling decides to escape her dismal life of poverty to gamble, drink, and sleep around, renaming herself Elaine for her job as a nightclub hostess in Sandakan.

After Aaron meets Elaine, he decides to marry her. But his troubles begin immediately as Elaine continuously gambles away all the money Aaron makes. As the story evolves, she also causes harm by mostly ignoring their three children along with Devin, Aaron’s son from a previous relationship.

This sprawling story shifts often from action scene to action scene, and the narrative perspective changes from chapter to chapter. However, it is missing a clear definitive plot to drive the novel. The strongest characters to evolve—albeit through negative behaviors—are Devin and Raymond. Aaron and William, while sympathetic “good guys,” are emotionally flat men who inexplicably allow women, friends and family to take advantage of them time and again.

The author does offer occasional skilled descriptive moments. For example, he notes that when the sea breeze blew into the needle-like leaves of the thousands of tropical pines known as Casuarinas, “. . . the sound of the wind made a beautiful rhythm.” But despite such enhancements, the story lacks a powerful narrative arc. Critical to providing the spark that sustains audience interest, this failing will likely prove hard for readers to surmount.