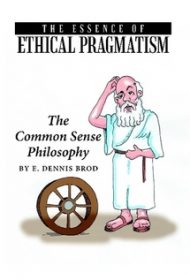 With The Essence of Ethical Pragmatism, E. Dennis Brod gives readers decision-making tools grounded in pragmatism, a philosophy developed by Charles Peirce and William James that takes a practical approach, affirming solutions that produce workable results.  Brod, who characterizes himself as an autodidact, couples this approach with an ethical imperative based on the premise “that human life has value,” and that seeking what’s best for humanity should be part of any goal.

In making decisions, Brod notes, individuals must pick a desired effect and the causes that will lead to that effect. Brod recommends a four-part process entailing “observation, analysis, evaluation, and conclusion” to determine whether a goal and the steps toward it are viable. The author gives detailed explanations and examples for each of the parts and, in particular, emphasizes that during the observation phase, the decision maker must eschew preconceived beliefs and values and focus on facts “gathered from hard, cold emotionless observations.”

In addition to outlining his philosophy, Brod provides examples of historical figures, ranging from Confucius to Martin Luther King, whom he feels exemplified pragmatism.  He devotes another section to showing how ethical pragmatism could solve problems associated with such hot topics as capital punishment and illegal immigration.

Brod’s book is clearly written and easily accessible to lay readers (who will also appreciate the book’s lighthearted illustrations). In his eagerness to make a point, however, he sometimes over-generalizes or omits pertinent facts. “In societies valuing human life,” Brod asserts, “there seems to be little concern regarding the practice of extinguishing many other living things.” (What about societies practicing Buddhism and Jainism?)  In his discussion on immigration, he implies that illegal immigrants might collect Social Security but fails to mention that they must have first paid into the system for ten years.

As a result, readers will want to approach this book with critical discernment. Still, those seeking a practical philosophy will find interesting ideas presented here.