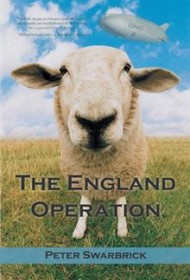 The alternate history is at least as old as Mark Twain’s A Connecticut Yankee in King Arthur’s Court, but the science fiction sub-genre has really come into its own in the past two decades with authors like Harry Turtledove examining what might have happened if one watershed event had turned out another way. In his satirical novel, The England Operation, former UN peacekeeper Peter Swarbrick takes it one step farther by changing the political power structure of the world and moving the Industrial Revolution back a thousand years.

The action takes place a century after the Norman Conquest of England in 1066. Two factions are involved in numerous skirmishes of a disorganized civil war. The Organisation of Nations of the World (ONO) decides to send a peacekeeping mission to England to attempt to stop the rape, killing and plunder. In Swarbrick’s world, the United States of Africa is the most powerful country. Other members of the ONO council come from Rome, Tokyo and Bangkok and a few other major cities.

Readers should be reminded of Jonathan Swift, as the author satirizes recent genocide and other struggles in various African countries by having his advanced Africans bungle the peacekeeping mission to England in a mishmash of bureaucratic confusion, just as present-day humanitarian missions from the U.S. and Europe have failed and made robber barons richer and gun-running thugs more powerful.

Swarbrick might have been well served to offer an early chapter or prologue to explain how and when the Africans achieved their technological and political superiority, and a list of dramatis personae would have been helpful, as dozens of characters hop in and out of the pages, making readers back up to figure out who they are.

Despite these minor criticisms, The England Operation is an impressive and engaging look at how a totally different world could display the same stupidity as the real one.