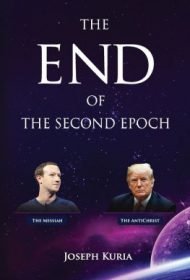 The End of the Second Epoch records the thoughts and spiritual visions of Kenyan-born architect, Joseph Kuria, revealing a series of spiritual messages Kuria says he received from God while offering criticism of political leadership around the world.

According to Kuria, during a 32-month period, the angels Michael and Gabriel, acting as God’s liaisons, offered him insights on the true roles of Jesus and Satan in modern times; future cataclysms set to hit Earth; and even knowledge of extraterrestrial information that we can access through prayer. Kuria waxes political as he reprimands world governments for their roles in Geo-pollution (pollution of the Earth’s rivers, lakes, oceans, forests, etc.), poverty, and drug abuse, saving his most biting disapproval for the “emperorship” of Donald Trump and U.S.’s narrow-minded and aggressive foreign policy.

The book’s core is the revelation that the world as we know it is “coming to the end of a lengthy spiritual dark age” and that a Third Epoch, a time when God’s people will become “one unified human race,” is dawning. There’s even a new messiah that walks among us, none other than Mark Zuckerberg, founder of Facebook. Why this seemingly unlikely figure? The reveal, which comes at the close of the book, doesn’t offer much explanation.

The book has a stream of consciousness feel—the visions concern numerous topics, from abortion to the nature of the soul to immigration—but Kuria’s prose is simple and clear. While it takes a dramatic leap of faith to accept the book’s “revelations” as God-given, the author’s criticism of political corruption, economic biases, and wars in Syria and South Sudan offer a sad reminder of Western governments’ often lack of understanding or compassion for other parts of the world.

Kuria takes his work—and visions—seriously and asks us to do the same. Many readers, however, will react with varying levels of skepticism as he points a prophetic finger at social and economic injustice and shares a message of hope.