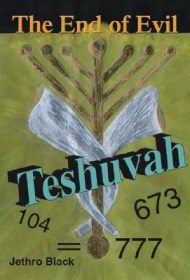 Gematria is an alphanumeric system of codes and ciphers that assigns a numerical value to letters (for instance, the letter A may be assigned the number 1, B, the number 2, etc.). Adopted centuries ago into segments of Jewish culture, Gematria was used primarily by Talmudists and Kabbalists who designed calculations to find hidden, and sometimes prophetic, messages in ancient scripture.

In The End of Evil, author Jethro Black uses Gematria to “show how the Hebrew Bible contains deep mysteries” that “reveal the Hand of God in the events of the world.” He does this by showing how certain ideas and word patterns are linked numerically. For example, after adding the values associated with the words “speak” and “create,” Black shows that the sum for each is 52. This suggests that the two words are related not only linguistically, but metaphysically as well.

Examining stories from the early books of the Hebrew Bible as well as events like the Holocaust and modern religious extremism, Black examines the numerical significance of several broad topics, including rebellion, jealousy, and terrorism, in order to answer the question, why do we suffer? Suffering, he argues, occurs when we disobey God’s laws and commandments. For example, phrases such as “The Primeval Serpent,” “The World Trade Center” and “Sexual Indulgences” each add up to 1386. Why is this significant? According to Black, the 9/11 terrorist attacks point to a western culture steeped in “materialism and hedonism.” Turn away from God, the words and numbers seem to say, and there will be consequences.

The End of Evil most likely won’t convince skeptics of the truth of this approach. It’s also not a book most will read cover to cover; copious rows and columns of letters and numbers dominate these pages and often prove daunting. Readers will also encounter numerous spelling and grammatical mistakes. Still, those interested in numerology and Jewish mysticism may find the numerical synergies noted here between word groups thought-provoking.