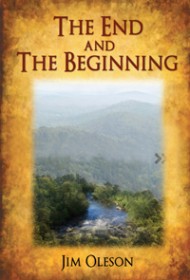 The End and the Beginning rests comfortably in the tradition of fine historical novels. Set in an early 19th century America populated by runaway slaves, abolitionists, explorers, indentured servants, and military men, it combines fictional characters with historical figures, such as the great Indian chief Tecumseh, to admirable effect.

As a child, Jim Morgan runs away from home to escape an alcoholic and abusive adult and is ultimately adopted by a loving family of farmers. After several years, the death of the family patriarch propels him back into the outside world, presumably to fight against the British and their Indian allies. But Jim has a strong emotional and spiritual connection with Indians dating back to his earliest days on the run, and he is tossed around amid conflicting loyalties. He joins the army, is wounded and captured. Eventually, he returns to the family farm and encounters not the Eden he remembers but many new problems.

The novel centers on the fading way of life that characterized those years. The “End” in the title refers to the end of Native Americans’ traditional rituals and lifestyles to make room for the Europeans moving into the Northwest Territories.

Author Jim Oleson has a gift for narrative. The novel moves along quickly and the reader gets caught up in the protagonist’s adventures. Oleson excels at dialogue and description. Here, for example, he writes of the aftermath of a terrible battle with Indians: “Jim’s body was exhausted, pain and fever draining his energy. His fear of faltering and being slaughtered pushing him forward. He could hear the drunken cries of the Indians mixed with the cold gusts of the west wind.. . . He now knew the violence of war, the overwhelming fear, the need to escape, the lack of honor, his own cowardice, the brutality.”

Marked by such poignancy, The End and the Beginning is a well-researched and engrossing read.