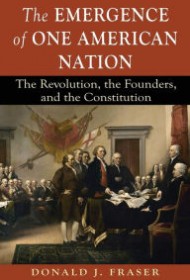 Fraser covers familiar ground, taking readers through the failures of the first constitution—the Articles of Confederation— to the deliberations of delegates who found themselves scrapping the hapless Articles in the late spring of 1787 and writing an entirely new constitution.

But the author doesn’t stop there. Unlike most books on the writing of the second, Federal Constitution, his narrative includes chapters on the formative role of the Colonial Period and the American Revolution. These chapters are nuanced and thoughtful, bringing badly needed context to the constitutional story. Likewise, most books covering the drafting of the constitution close with a discussion of its ratification and the role of the seminal Federalist Papers. After a particularly skillful treatment of the ratification process, Fraser concludes, instead, with a useful chapter on the many competing views held today of our fundamental statement of law.

A graceful and gifted writer, Fraser brings alive the interests and personalities of the delegates (his treatment of James Madison is as three-dimensional as any readers are likely to find), and he writes with the tone of a scholar who is truly excited by his material. He has read widely in an impressive number of primary and secondary sources and quotes from those sources with skill.

Academics will notice the occasional typographical error, the lack of a bibliography, and errors in endnote style. These are minor quibbles. Readable, challenging, thoughtful, and inclusive, The Emergence of One American Nation is an excellent choice for the college classroom in Early American or Legal History. It’s also a wonderful read for any history buff, and, in fact,  comes with the highest possible recommendation for any audience.