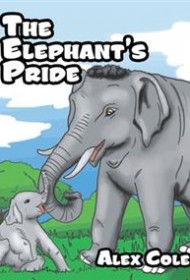 In this tender picture book about the subtleties of prejudice, a baby elephant is treated differently, though not necessarily unkindly, because he has lighter skin than other elephants.

One day as Junkra and his gray siblings are splashing in a water hole in Africa, they see humans photographing Junkra. Junkra’s siblings are afraid and run out of the water, but Junkra feels he has something to prove. He is tired of being treated like an oddity by the herd, so he seizes this chance to show the other elephants that he’s as brave as his father. He sprays water from his trunk over his back to draw attention to himself.

As he looks at the tourists, Junkra realizes they act much the same, even though they have different skin colors. He asks his father: “Do the humans treat each other different [sic] because of the color of their skin?” It’s an important question, but the conversation is interrupted by a herd of animals charging their way. Like the tourists, they have come to stare at the white elephant, and Junkra’s father sets out to prove to everyone that on the inside, and in most ways on the outside, Junkra is no different than any other African elephant.

Alex Cole’s tale offers a gentle look at benign bigotry — how even if others don’t mean harm, singling someone out because of his skin color is unfair and hurtful. It is hampered, however, by several flaws. The book lacks energy and is often wordy. It also overlooks details that would evoke more empathy for Junkra, namely in what way Junkra was isolated by the herd. (All we are told is that he was treated as “special.”) In addition, the digital art is uninspired and doesn’t always match details in the story.

That said, this is an interesting premise with much potential. Better illustrations, a tighter edit (including for grammatical errors) and a clever rewrite could deliver on that promise.