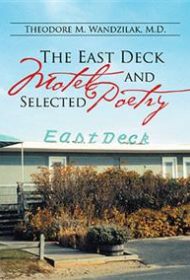 In his poetry collection, Theodore M. Wandzilak, M.D. wanders between past and present in first-person pieces written in straightforward language. Themes include nostalgia, aging,  mortality, and past romantic adventures.

Some poems sweetly combine sense of place with confirmation of emotional wisdom, as in “Ditch Plains Trailer Park,” which is set in Montauk and features a college student narrator and his mechanic uncle. The narrator seems to have gained appreciation for his uncle’s kindness, noting: “It is true what they say/ You will not be remembered by your material possessions/ But by how you made people feel.”

Many entries reflect on the narrator’s past, such as “People,” which explores the complexity of the individual in simple terms: “When I was young, I used to think/ That people were just one big moving part / I did not look at people very closely/ I just saw the forest and no individual trees/ I did not know that people were made of different parts.” The narrator claims to “see the big picture now.”

The most affecting poems are those that reveal Wandzilak’s world as an ophthalmologist confronting mortality. “A Routine” details one morning in which the speaker sees “a fresh grave being prepared.” Once in the office, numerical details such as lights being turned on “one by one” and the placing of “three pens” in the lab pocket give the scene tangible reality. He concludes with a specific story of a dear patient who died but had been “in the office last week.” Such references give readers a sense of the poet’s care for his patients, lending the collection a warm, humane framework.

While often cheerful, many poems are somewhat bland and devoid of specific and engaging details. Overall, they lack the attention to musicality or variation in form that would intrigue fans of more sophisticated fare. Nonetheless, their appealing sense of place and time will engage some readers, perhaps especially those who grew up in the ‘60s.