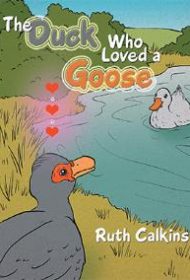 This rhyming picture book follows the first-person narrative of a duck’s unrequited love.

The narrator introduces himself as Alexander, a Muscovy duck who lives on a farm. He explains that, as a young duck, he fell in love with Lottie, a goose and fellow farm inhabitant, as soon as she hatched. A rival goose named Pinky also falls in love with Lottie, and the two males pursue her jealously until a storm destroys their shared coop. In the aftermath, Alexander accepts that Lottie has chosen Pinky over him but still helps them both descend from the tree in which they took shelter. Shortly thereafter, Alexander comes across an equally beautiful duck and proposes marriage.

While the story closes with an ostensibly happy ending, Alexander’s shallow approach to love will challenge adults trying to instill in young readers a nuanced understanding of relationships. In fact, Alexander is never even described speaking to Lottie, instead only praising her physical attributes: “The object of my love was fair,/ so white with eyes of blue” and “she got more white and lovelier/ the longer that I watched!” He reacts similarly to seeing the duck in the last few pages and asks her to be his bride after a very brief conversation. This approach confuses the line between infatuation and love, ignoring key elements of healthy and sustainable relationships such as communication and companionship.

In addition, the story’s rhythm is uneven and awkward, as in: “MY NAME IS ALEXANDER, I’M A/ YOUNG MUSCOVY DUCK./ I’VE HAD MY SHARE OF TROUBLES, TME OF FUN./ BUT ONE ESPECIAL TIME THERE WAS/ WHEN I WAS REALLY STUCK,/ BECAUSE I FELL IN LOVE AND WAS UNDONE!” (The prose is presented in all caps throughout.) Punctuation errors and typos also reduce the book’s polish.

This story may be premised on love, but it does so by elevating appearance at the expense of everything else. As such, it sends an unfortunate message to young readers.