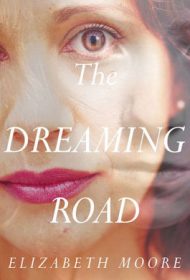 Elizabeth Moore’s The Dreaming Road is labeled novel. However, although names have been changed, it describes a situation the author feels is true: an alternate reality inhabited by her deceased teenage daughter.

“Callie” is 16, beautiful and healthy but somewhat rebellious, with occasional drunkenness, drug use, school truancy, and mild depression. She’s a moderate concern for her parents, who are divorced—until one morning, “Diane” discovers Callie’s lifeless body on the bedroom floor. An autopsy reveals suicide by an overdose of her antidepressant medication.

Diane is devastated and tortured by many questions, especially why her daughter felt so hopeless that she wanted to die. Her search for answers includes psychic mediums, diary writing, and meditation. Then she begins to hear Callie’s voice in her mind. The voice, insistent, asks that Diane write a book featuring the stories of both women: alternating chapters with Diane’s voice and Callie’s voice.

Diane’s chapters describe her daily life, which includes regular meetings with a New Age group. Callie describes her own spiritual experiences in “Summer Wind,” the magical, yet similar-to-Earth, realm into which her spirit was transported. She drives her beloved cobalt-blue Mustang (“imagined” into being), counsels troubled teens who have passed over similarly, and reviews the life she left so rashly, through therapy—or life review—sessions with more enlightened spirits, such as her great grandmother Ellie and her teacher, angel Seraphiel. Her messages, somewhat rambling, offer Diane comfort, if not total relief from her grief.

Moore includes much detail about New Age healing techniques and spiritual communication that will appeal to newcomers and experienced spiritual seekers. Her writing is chatty, descriptive and engaging, and despite the subject, the tone is inspirational and somewhat joyful as we see a mother emerge from a shattering loss and resume her career and life with her son and boyfriend.

While not for everyone, Moore’s book will interest those open to the author’s portrayal of the afterlife and her related spiritual journey.