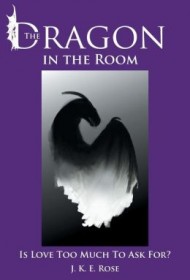 Two failed marriages inspired J.K.E. Rose’s dark collection of 59 free verse and casually rhymed poems about chasing internal and external dragons, her metaphor for love. Mostly focused on romantic relationships, additional poems examine family and self. Rather than individual titles, poems fall under nearly three-dozen “dragon” headings, such as DRAGONSBLOOD, DRAGONLOVE, DRAGONDREAM, DRAGONBITTER and DRAGONSBANE, which are repeated throughout the book.

In addition to the dragon motif, a Viking futhark (from the Runic alphabet) divides poems into sections. Back matter titled “AFTER THE END” introduces yet another symbolic idea, Kintsukuroi, the Japanese art of restoring shattered fragments of pottery to its original form, but allowing the “healed wounds” to remain visible.

Despite the plethora of symbolic framework, the actual poems are fairly straightforward, repeating common words and images, such as blood, scars, tears, skin, bones, dreams, death, and, of course, dragons. The book retains a narrow focus with first-person accounts lamenting the author’s solitude (“You told me not to bleed, / not to stare wide-eyed with loneliness, / not to shiver with despair”) and attributing blame (“I prove you wrong / I make me strong”). Poems toward the end offer glimmers of hope: “I will not fall in love again — / not fall but soar aloft.”

The strength of this collection lies in the writer’s wordplay. Rose juxtaposes words with similar sounds to add artfulness to routine observations: “if all I need is breath and bread and breadth of hope, / then let me stay” and “I wish, I want, I breathe / holding / haven / heaven // exhale / exhaust then / exit.” She also includes colorful imagery (in addition to dragons), comparing herself to a mountain, marriage to a lion, and her protective shell to a snake scale.

While the author offers little in the way of new insights into love, those with the same dark mindset and affinity for dragons may find poems to appreciate in this book.