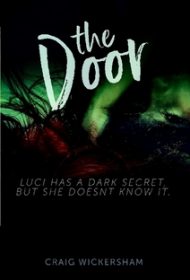 Craig Wickersham’s The Door is an engaging fantasy featuring a protagonist who blossoms as she discovers her own strengths.

Seventeen-year-old Luci Comburet has low self-esteem. She’s too thin, has scraggly black hair, a pallid complexion, and no friends. One day, she awakens in her broken-down trailer home to an overwhelming odor and is shocked to discover its source: The grandmother she lives with has died in her sleep. Weeks short of her high school graduation, she’s shuffled off to a small Nevada town to live with a great uncle she has never met.

Soon, strange things begin happening: She hears voices in a foreign language; her new school is entirely populated by attractive blond-haired students and staff who avoid her and call her “sinner”; she discovers an ancient wooden tablet; and, within a week, her great-uncle’s home burns to the ground with him inside.

As Luci goes on the run, her journey leads her to Las Vegas, where blond-haired folks and their minions want to kill her, and wealthy dark-haired people want to save her—while seeming to worship her. Eventually, Luci’s protectors take her to L.A., where she learns a shocking secret even her saviors didn’t know, setting up sequels in the trilogy.

As the well-described early scenes of rural decay shift to the opulence Luci finds in Las Vegas, they parallel L.A Luci’s “ugly duckling” metamorphosis into a young girl discovering the powers and beauty within herself—an intriguing plot device.

Meanwhile, Wickersham is adept at creating natural dialogue; the narrative moves quickly, and the minor characters, despite brief appearances, are vital to the story. Readers are likely to be annoyed that Luci’s saviors keep dying off before revealing why she hears voices, has strange powers and other mysteries. But the conclusion’s surprising revelation should entice them to see what other secrets await in future books.

Readers will eagerly anticipate The Door Unlocked (just released) and The Door Unhinged, which complete the trilogy.