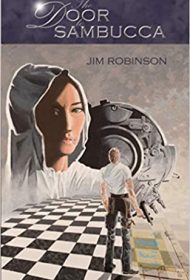 In Jim Robinson’s The Door to Sambucca, protagonist Nathan is a righteous man who was born into a wicked bloodline. Although he hasn’t seen his family since he was young, he embarks on a quest to detain his unholy nephew, brother, and father to prevent the tribulation of the End Times.

This story’s plot is grandiose and, unfortunately, more confusing and disjointed than satisfying. Nathan spends more than half the book preparing for the battle with his family members, but readers aren’t aware this is happening; all readers know is that he works on a farm, and a random Chinese man shows up to ask for food and water, say thank you, (oddly in German) and drop off random objects for Nathan. Readers realize he has been preparing for battle when Nathan uses the objects in his search for his family members.

Several details are mentioned that don’t seem to play a part in the overall plot: For example, Nathan is a Vietnam vet, and his wife and child are missing. Even the significance of Sambucca is vague: We know it’s a place because a door leads to it, and it’s clear it’s something like hell, but it’s only mentioned a handful of times, rendering the book’s title a bit puzzling.

Part of the confusion stems from the author’s often-incorrect use of words: “He was a very solitude man”; “You were found wondering [sic] through a crowd boldly”; “…Europe did not know about any of this because it was still antique.” Awkward sentences abound: “Yet, he was fumbling his walk with fatigue, and the more he went without sleep . . . the more he slipped into the sensations of his apocathary [sic].” And typos add to the problem: “Nathan lost his mile [smile] just a little”; “I do not recall hat [that] in the Bible…”

In sum, while the plot’s essence is valuable and unique, the book requires thorough revision to reach an audience.