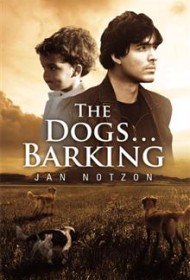 The Dogs…Barking is a novel that follows its male protagonist through several trials and tribulations.

Young Jason is mistreated by his siblings and sexually abused by a priest. He suffers lifelong self-esteem issues as a result, but gets himself to college in time for the 1960s counterculture and then to New York to pursue an acting career. He ultimately moves to Luz Oscura, the small town on the Mexican border where he was raised, hoping to confess his love to lifelong best friend Kathryn, but things don’t go as planned.

There is much potential here. The love story doesn’t have a pat finish, a refreshing change of pace. Jason is a kind young man, and readers want him to succeed. The dialogue is largely clean and realistic.

Problems arise in the narrative, however, which is so overwritten as to obscure meaning. For example: “He never imagined then that he could pass down to his children that monumental self-doubt and nagging sense of unfulfillment… like a leprous venom injected from a syringe of anger and frustration through a needle of puncturing words, and land, with all their destructive force, upon his youngest and most vulnerable.” Much of the text bursts with similar hyperbole when a simpler style would better serve the story.

There’s also the matter of the title. The Dogs…Barking is an unusual choice, and author Jan Notzen employs the phrase several times and also titles sections of the book “The Dogs Appear,” “The Dogs Forsake,” and so on. But he never makes Jason’s connection with the dogs implicit or clear. There’s a well-written moment at the end when Jason speculates about the meaning of dogs barking outside his hospital window, but it’s not adequately set up by what comes before.

Ultimately, this book may appeal to readers who like to root for a sensitive underdog, but would be more likely to reach them with better editing for content and context.