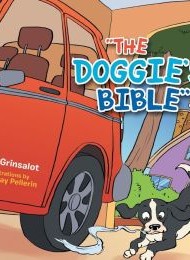 In this religious-themed, rhyming picture book, a spaniel-like dog uses her sense of smell to learn what’s important in life. She sniffs a tire on a car, and a succession of scents transforms the tire into a human-like guide that shows the eager dog examples of the good and the bad in the world.

Author Sir Grinsalot writes on the book’s back cover that he wants to bring healing to readers who have been bullied, and he dedicates the book to the biblical figure Abraham. Perhaps, like the patriarch, the tire wants to help humanity establish a relationship with God, which, it believes, we struggle to do:

“I hear what I see and I taste what I smell, / I feel and I learn till my thoughts finally gel,” the dog says. “This tire is speaking but humans don’t hear, / They seem to forget what is dear to hold near.”

Unfortunately, the book’s message is often difficult to piece together, due to imprecise writing. It isn’t immediately clear, for example, that the first quote is from the tire, not the dog. Later the dog says, “it smells like the wind,” but while wind carries smells, it doesn’t smell itself. Readers might also be puzzled that a tire with arms and legs would be used as a religious guide.

Though it’s well meant, The Doggie’s Bible might be too confusing to accomplish Sir Grinsalot’s goal of helping kids find spiritual healing in a sometimes bewildering world.