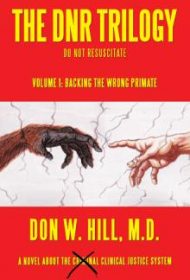 A traumatized doctor revisits events that broke him in this sprawling look at the dark side of modern medicine, the first of a trilogy.

The novel, as author Donald W. Hill notes, “transects many genres, including historical fiction, medical drama, crime and punishment…” As such, it’s a difficult read with morally compromised characters and a skewed narrative arc that ends abruptly.

The main character, Dr. J.D. Brewster, is grossly unsympathetic.  He’s a fat, unapologetic racist whose defining feature is a strong desire to commit suicide. The main kernel of the book involves Brewster’s flashback 35 years to the events that shaped him into the spiritually broken man he has become. Specifically, it seems that as a young medical student, he conspired with four others to kill or otherwise neutralize a patient Brewster deemed evil, although we don’t see the misdeed done in this volume.

While that thread would be plenty to occupy a morality play, Hill overreaches in trying to shoehorn in too many other plotlines. Brewster’s research into hepatitis infection draws him into department politics, complete with a host of undecipherable medical jargon. A pair of African-American youth, drawn with a racist patina (“Smeg Nog” and “Big Nig” are foul-mouthed, drug-using ex-Black Panthers), viciously assault a white nurse for no discernible reason. In one memorable subplot, Brewster engages with a doctor whose hobby is looking for Bigfoot; in another, he struggles with using animals for medical research.

Writing about the fabric of American society can be cathartic, as evidenced by the legacy of the late Pat Conroy. It’s possible the author is trying to accomplish something equally ambitious here, marrying the innate drama of the medical profession to a saga of crime and punishment. But it’s hard to glean the bigger picture in this morass of plots and genres.

Readers are left with an overlong, convoluted novel with a host of disturbing themes, imagery and ideas, whose higher purpose remains elusive.