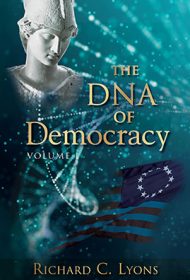 In this timely collection of historical essays, award-winning author and poet Richard C. Lyons examines the underpinnings of two competing styles of political leadership: democracy and tyranny. Lyons aims to “bring clarity to the understanding of our present state of government” and issues a warning that we must be vigilante, as “Democracy can end. Liberty can be lost.”

Selected historical examples, arranged chronologically, explore past governments— from ancient Egypt, Israel, Athens and Rome through medieval and absolutist Europe to the rise of America and its struggle for a lasting Union. He concludes with a brief tip-of-the-hat to the women’s movement.

Lyons’ colorful narrative includes quotations from poets of the time, the Bible, philosophers, and heroes who fought the “ravages of tyrannical power.”  Repeatedly, he illustrates that democracy’s strength lies in the people who put the defense of the common good and rule of constitutional law above all.

The book offers, at best, a general overview of western history, but it’s highly entertaining, proceeding with laser focus: The triumph of democracy is to be preserved, and America is the flowering City on the Hill. Missing is discussion about democracies that devolved into mobocracies that clamored for a powerful tyrannical leader to restore order. His theory that generally tyrannies breed rebellion and democracy is narrow, as the opposite is also true.

Overall, Lyons discussion lacks balance. The book’s first third is devoted to the 4,000-year history of tyrannies and the rare democracy, while the first 125 years of America’s democracy comprise the last two thirds. Lyons then skips to 1963 with illustrations showing how democracy leads to the flowering of artistic, industrial, and spiritual enterprise. A second volume promises a look at origins of modern threats to democracy and how they can be thwarted.

Despite its flaws, the book offers many rewards. Lyons’ belief that “today’s tyrants often take care to drape their rule in the décor of democracy” is an intriguing invitation to his next book.