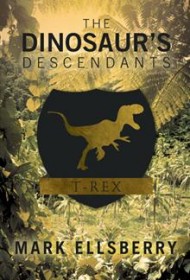 The Dinosaur’s Descendants is a sci-fi tale in which the actions of a time-traveling, prehistoric reptilian creature push the world toward global war. Conveniently, the U.S. National Security Agency happens to have created a time machine of its own and organizes Team T-REX, a group of scientists and soldiers that ultimately becomes involved in high-stakes battles both present and past with the creature’s race.

While Team T-REX is traveling back in time to find this technologically advanced race of humanoid reptiles – the dinosaur’s descendants of the title – the reptilian agent, SuHa, from a land called Laurasia is initiating present-day terrorist plots. A dictatorial leader has assigned him to destroy the modern “mammal” civilization so Laurasia can solve a lack of natural resources with oil from the future.

The story clearly has some creative concepts. Though it’s reminiscent of Planet of the Apes and other time-travel tales, author Mark Ellsberry has combined these ideas into a narrative that’s sometimes intriguing. However, the storytelling doesn’t do the concept justice. The book’s dialogue is blatantly unrealistic, and much of it is used to dole out long stretches of blunt exposition.

In one scene, Khaliq, an al-Qaeda operative in cahoots with SuHa, is testing remote-controlled explosives in the desert when a dune buggy crosses the test site. “Wait a minute. Someone has come into the test area,” whispered Khaliq. “Let’s hold a minute to see if he passes out of our way. Oh, no, he has seen the backpack and is stopping to check it out. Activate the transmitter!”

Action throughout the story defies belief, even for a fantastic tale, as when SuHa convinces Khaliq at their first meeting to accept $50 million to blow up Pasadena’s Rose Bowl. Not only does the al-Qaeda agent accept the deal, but SuHa somehow delivers $50 million in a single suitcase. The Dinosaur’s Descendants is certainly imaginative, but its lack of craft ultimately makes for an unsatisfying read.