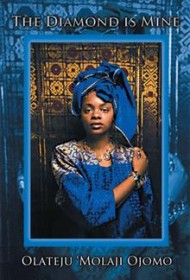 In Olateju ‘Molaji Ojomo’s novel, The Diamond is Mine, Denise Jasper loves her country of Nigeria but hates its rampant corruption, so she sets out to change things by enrolling in the police college and later joining the Crime Investigation Department. But gang raids of parties are common, and while Denise celebrates her birthday at a party thrown for her by her husband, her Mercedes is stolen and their son Rich kidnapped. Denise must find him before he is killed.

The novel’s opening pages are energized and compelling, as are side stories of Nigerian residents struggling with the corruption that disrupts their lives, down to the highly unreliable electrical system that works better with bribes. Ojomo sprinkles in many cultural details as well, such as the natives’ belief that no death is natural; rather, “some supernatural being must have influenced it in one way or another.”

The introduction of native words and phrases adds to the book’s interest. One man’s bravery and fearlessness, for example, is known as “ekun apomoje,” which means “the man-eating tiger who eats the enemies.” In addition, Ojomo offers unique expressions, such as when describing Denise falling in love: “Her heart did a double tumble inside her tummy.”

The Nigerians’ stories are individually engaging, however, the book’s downfall is that they don’t connect as a solid work of fiction. The book drifts from the plot to the author’s numerous personal asides discussing Nigeria’s sad state and present dangers to the populace and the younger generation. “What is the government doing,” Ojomo says, “and where are the law enforcement agents? Helloo?”

Despite organizational issues, The Diamond is Mine is a likable book. While the jumbled story line will likely deter many who would have been interested in the author’s cultural observations, Nigerians at home and abroad will find appeal in its sharing of honest details about a government in need of reform.