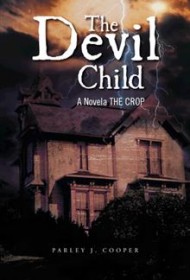 In this suspenseful gothic novel, a young woman named Lillith struggles to free herself from the psychological bonds of Clarke House, once the proud family home, now a crumbling mansion.

Lillith lives alone with her infirm Aunt Veeva and her brother Arhen, until he mysteriously disappears following the apparent death of their mother. Lilllith is known as a half-wit, subject to fits, causing the townspeople to label her “the Devil Child.” Encouraged by her aunt, Lillith believes in demons and witches and hopes to cast an evil spell on the townspeople someday. Only her aging friend Mr. Thomas tries to help Lillith face the truth.

Cooper is a solid writer and takes his cues from books such as Jane Eyre that combine several genres: in this case, a gothic tale of moody atmosphere and mysterious doings mixed with a coming-of-age story. The author seems to have paid close attention to the details, even in characters’ names. Lillith, despite the two ll”s, harkens to the Lilith long associated with the occult; the name Veeva is a variant on the Latin word “viva,” which means “alive,” (an ironic touch, given this character is barely living); and Echo, Lillith’s mother, is likely named for a nymph from Greek mythology who disappears except for her voice, much as this Echo now appears to her daughter.

For fans of this genre, the story delivers an engaging read. At the end of The Devil Child, Cooper includes a 15-page story called The Crop, a Twilight Zone-like story. This kind of short story could have seemed like a filler, but in this case, it’s a bonus.