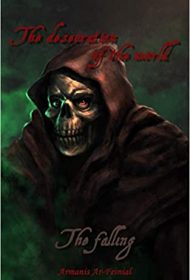 In the third installment of Armanis Ar-feinial’s epic fantasy saga The Falling (after 2014’s Secrets of Terra Silenti and 2016’s The Covenant), the dark reach of Decrepantaur, rumored to be a fallen angel, is spreading across the land and threatening to destroy all innocents in its path.

Set in the realm of Alkathos, the novel begins in the fortress city of Kenderhell as it’s being attacked by dark forces that include orcs, goblins, and walking dead. As heroes like Constable fight back the invaders, others like Artaiya and her younger brother Leryk struggle to survive in order to plot vengeance against those who killed their mother and destroyed their city. The siblings, however, end up following very different paths.

Numerous plotlines are at play here as the story unfolds and include Kac, an elf ranger whose heroics are making him a living legend, and Gordir, an elf who, after rededicating his life to his god Unverdus, becomes a seemingly unstoppable force for good.

For all of the action and adventure, however, this novel suffers from some serious issues. The writing is replete with copyediting errors (“…but the childly fear of a child…”; “…she felt a slimy presence sliver around her leg”) and grammatical issues that create puzzling sentences, as in “Dreams or nightmares in the dream realm are always needed to be read into.” These make for a continually frustrating reading experience.

But perhaps the biggest flaw is the bloated storyline. The lack of consistent description makes the large cast of characters almost impossible to differentiate, and the author compounds the problem by introducing characters and then proceeding to ignore them for huge chunks of time. Artaiya, for example, is prominently featured in the first 90 pages and then isn’t mentioned again until page 397.

Although the main storyline has the potential to appeal to fans of grand-scale fantasy like Robert Jordan’s Wheel of Times series, the many narrative issues make this a forgettable read.