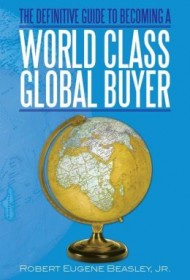 This book is intended to help buyers for global companies and corporations whose job is to procure the necessary goods and services provided by sellers around the world.

Before his retirement, Robert Beasley, Jr. spent almost four decades doing just that, mostly in the oil and pharmaceutical industries, so he would seem the ideal author for this project. Alas, not so.

First, huge swaths of this book are simply cut and pasted, with only slight alteration, from Wikipedia – for example, 25 pages on ethics, 18 pages on game theory, and a chapter on contract law and negligence. This is a shortcut Beasley only fleetingly acknowledges.

But even with all the extra virtual help, this book fails to deliver much that’s specifically relevant or of any practical value to global buyers. For example, the qualities and talents Beasley identifies as essential for success in that field – things such as honesty, tolerance, public speaking ability, mentoring, team-building, and computer skills – apply equally to countless other jobs. It’s not until over halfway through the book that he throws readers some meat with an insightful chapter on evaluating suppliers and the wisdom of negotiating long-term agreements with them. He also shares a neat little trick of having suppliers evaluate his company. “It was eye-opening…” he writes. “We were often graded somewhat harshly but needed the input in order to become that World-Class Corporation we had always desired to be.”

Sadly, such pertinent information is in very short supply. Instead, a chronic lack of focus, combined with poor copyediting — missing words, misspellings and occasional repeated passages – diminishes this book, as does Beasley’s blatant sense of his own cleverness, illustrated periodically by such self-serving comments as: “…I was told by many that I was the greatest speaker of the conference…”

Producing the “definitive guide” to anything is a rather tall order. Unfortunately, with its many issues, this book doesn’t rise to the challenge.