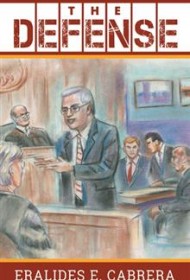 In this contemporary legal thriller, the perennial battle between the prosecution and defense rises to a fever pitch as each side wages war against corruption and wrongdoing.

In a small New Jersey town, a body is found, shot and disemboweled. Three suspects are quickly charged, all of them practitioners of Brazilian Santeria, which worships the spirits of the dead. A local top cop, Dean Summers, is credited both with finding the mutilated corpse and efficiently closing the investigation.

Enter James Sinaro, a young, hip defense attorney, and his ethically challenged investigator, whose effective representation of one of the defendants depends on unanswered questions: Where is the gun that allegedly killed the victim, and what, precisely is the cause of death? And the biggest question of all: Did the prosecutor withhold key evidence from the defense?

The novel’s strength lies in the authenticity of its courtroom scenes, which feature an intriguing subtext involving the born-again Christian judge and his female court clerk, a woman Sinaro believes has undue influence over her boss. But ultimately, the novel succumbs to its flaws. Characters are poorly developed, making it difficult for readers to relate to them; we know what they do, but not who they are beyond this surface information. And all we’re are told about the victim is his name and race, which is highly unusual in a suspense story, where the victim’s past offers clues to his fate.

The book also suffers from repeated misuse of prepositions and idioms, and the writing is uneven, with solid, tight prose competing with rambling sentences. Finally, the conclusion, which should have been a blockbuster, leaves readers entirely unsatisfied.

The plot of The Defense is absolutely tantalizing, but the novel needs backstories of the key players and a richer sense of place. Any book by bestselling author James Grippando would serve as a textbook for this author, whose potential is evident, although never fully realized in this book.