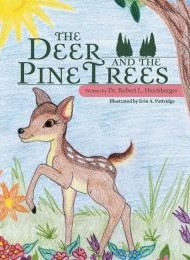 In this picture book, author Robert L. Heichberger tells a tender story of two shy orphans who reach out to one another on Christmas Eve and experience the joy of finding a true friend.

As the story begins, a lonely fawn searches a meadow for somewhere to belong as feelings of isolation set in and tears run down her face. When night comes, the fawn sees a tiny pine tree shedding tears of pine needles. All the trees around the sapling have been cut down for Christmas.

The needles form a soft bed, so the fawn curls up beside the pine. Soon, feelings of warmth flood over them both; out of a cloudless sky, snowflakes fall onto the tree, magically adorning it like colored lights. Then a large snowflake lands on the top and becomes a glowing angel.

When spring comes, the fawn goes off into the world, matures and has two fawns, while the sapling roots in, grows taller and sends seeds around her to make a family. One day, as the deer’s fawns are foraging, they head into the path of a truck, and their father suddenly appears and saves them. The fawns don’t seem to know he’s their father, but they’re glad he’s watching over them. Come fall, the doe takes the fawns to visit her dear friend the pine tree, and they see that the pine tree has a family, too: a giant pine, the husband, now shades her and their twin saplings.

Heichberger’s prose is drawn out and would benefit from tightening. Also, the introduction of the fawns’ father is too abrupt. Readers unfamiliar with how deer families live may be confused by the father’s early absence.

The story, however, is sure to touch young hearts. Heichberger’s reference to the sapling weeping needles is moving, as is the enduring bond between deer and tree, echoed in Erin A. Pattridge’s gentle drawings.