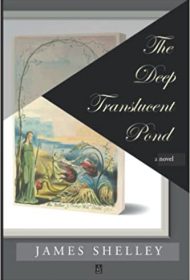 Jerome, a buttoned-down lawyer, nurses lingering wounds from a broken marriage. He’s guarded, skeptical, and emotionally numb, which may be both the cause and effect of his relationship troubles. Natalija is his complementary opposite. A college dropout working as a caretaker, an immigrant with the hint of her own past traumas, she’s a born empath, creative and spontaneous.

They’re strangers, but each is a modestly successful aspiring poet, and now they’ve won the only two spaces in an unusual fellowship led by a writer who calls himself The Black Magus, a once-famous poet from the ‘60s whose eccentricities and challenged mental health have led to a secluded life and secret literary project. The three will form what the Magus calls a “Triangulum,” gathering weekly to share new poems on prescribed themes, a ritual the Magus presents with spiritual reverence, because as it turns out, this is the final Triangulum, the Magus’s swan song.

Jerome is hesitant, his initial participation having more to do with an infatuation with Natalija than The Black Magus, but in the Magus, Natalija has found a true mentor, someone to believe in her. Together, they will grow closer than any of them would guess, and the impact of their fellowship will echo in unexpected ways across each of their lives.

Shelley writes with maturity and naturalism, an inherently captivating combination. His characters, drawn with restraint, are relatable and genuine. This adds a sense of realism but may leave readers wishing he had delved deeper into the lives of Jerome and Natalija to convey a more concrete understanding of the demons they’re battling. Ultimately, readers might be left with a lingering sense of unexplored territory at the margins of the story.

Still, they will appreciate the character development, which is intimate in scale and gradual, and the novel’s compelling and resonant ending.