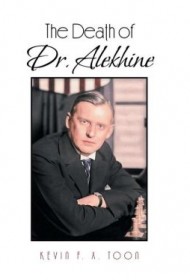 The Death of Dr. Alekhine is a crime novel about the investigation into the death of a chess champion in post-World War II Paris.

When the body of Dr. Alexander Alekhine is found in a hotel room, all signs point to suicide or accidental death; after all, there’s no evidence of foul play and the door was locked from the inside. But Detective Inspector Jacques Colbert believes there’s more than meets the eye here and is intent on proving the man was murdered.

Kevin F. X. Toon’s book takes readers back to 1940s’ Paris, a city recovering from the war and Nazi occupation. The author does a solid job of conveying the atmosphere, keeping the memory of World War II large in readers’ minds. The centerpiece of the novel is Dr. Alekhine, who is not a likeable character by any stretch of the imagination, but then again, he’s not supposed to be. Alekhine’s past isn’t the most straightforward of subjects, and Toon leads readers on twists and turns as Colbert tries to uncover the motive behind the man’s supposed murder, keeping readers guessing.

However, The Death of Dr. Alekhine becomes bogged down, at times, due to the author’s passive writing style. Many times, Toon tells readers about events, rather than showing them through characters and dialogue. There are also discourses about historical events that feel more appropriate for a textbook than novel. (“Thus Goering, supreme Marshall of the air force, persuaded Hitler that air power alone…would force England to capitulate.”)

What’s more, readers might take issue with some of the statements the author makes, such as “From 1940 to early 1942, the French did not, apparently, consider the occupation to be particularly onerous.”

While the plot presents an interesting mystery, historically minded readers might have problems with the author’s interpretation of past events and many will stumble on the less-than-active prose presented in The Death of Dr. Alekhine.