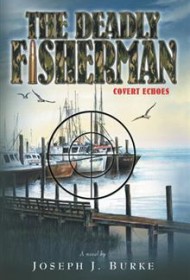 Commercial fisherman Jon Morton’s history as a covert operations officer comes back to haunt him in the action novel The Deadly Fisherman: Covert Echoes when he realizes a vicious terrorist nicknamed “El Tigre” is out for retribution over past hostilities in a Colombian jungle.

The book jumps quickly into a fast-moving flashback to the graphically violent mission that prompted El Tigre’s revenge plot, but that momentum largely disappears once the mission ends. The adversaries don’t actually face off until the last few chapters, with much of the present-day action akin to treading water.

There’s a clear line of demarcation between what The Deadly Fisherman does well and what it doesn’t. The brutal strike force scenes have a propulsive energy that should entertain devotees of violent action. Author Joseph J. Burke also is skilled at providing intriguing details of topics that interest him, ranging from military tactics and commercial fishing to single-malt scotch.

There are also significant structural and mechanical problems. For example, the book fails to reveal that the present-day setting is North Carolina until Chapter 21, almost 100 pages into the story, and misspellings pop up occasionally. Parts of The Deadly Fisherman may interest fans of hardcore action, but overall its flaws are too many and too deep to lend the story widespread appeal.