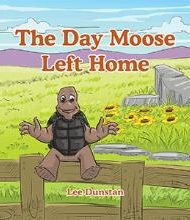 The story begins with a family visiting their local pet shop so the youngest boy can buy a turtle for his birthday. He chooses the smallest turtle with the intention of taking such good care of his pet that it will “grow to be as big as a moose.” Soon the turtle outgrows his tank and moves outside to the garden. Then, one day while the children are at school, Moose climbs over the fence and falls into a stream.

When the children come home and discover that Moose is missing, they search until finally rescuing him just before the rapids carry him away to the river. The parents buy another turtle to keep Moose from getting lonely and leaving home again, which they assume is the reason the turtle left their yard.

The narrative is written in clear, straightforward language, and a turtle named Moose will certainly catch young readers’ attention. The problem with the story, however, is that its moral is hard to discern: Is the author saying that wandering off from your home and family is a bad idea? Or that loneliness can make one dissatisfied? It’s hard to know, as Moose’s motivation for leaving the property is never explained. It seems more likely that he’s curious, rather than lonely: “He climbed up the wooden fence around his pond, looked around, and plopped onto the grass below.”

Additionally, while the colorful artwork is simple and engaging, some of the perspectives are distorted (e.g., extremely large-headed grandparents), and Moose is depicted inconsistently, sometimes with hands and sometimes with webbed claws.

A stronger moral and attention to detail would greatly improve this story. Still, some young readers may enjoy the idea of reading about a turtle with the amusing name of Moose.