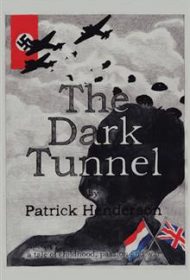 Focusing on the period after WWI through WWII, Patrick Henderson’s The Dark Tunnel offers a sometimes heart-warming, sometimes tragic tale centered on British army general John Rutherford and his extended family in Holland and Germany.

After an opening segment where readers meet Rutherford, who served valiantly in WWI’s trenches, and his wife, a woman from a well-to-do Holland family, the story then focuses on their son, Robert. Robert wants to be a classical musician rather than soldier and grows up feeling that he can’t live up to his father’s expectations. He is close to his German cousin

Karl, considering him a brother more than cousin. When Karl joins the Hitler Youth, Robert gets an unfiltered look at how many so-called “good” Germans are seduced into Hitler’s evil actions, and observes increasingly violent anti-Semitism. Karl dismisses Hitler’s racial ambitions, but Robert soon realizes evil has been unleashed on Europe.

A third cousin, Lisa, provides a romantic interest for both of them. And when Robert returns to his grandparents’ home on a special mission during the war, a discovery from their youthful days brings them all together tragically. Throughout, contemporary social issues—near-Victorian sexual mores and discrimination against homosexuality—enter the narrative.

The novel’s prose is empathetic, thoughtful, and insightful, especially when framing Robert’s insecurities. Henderson generally makes his supporting characters believable, with nuanced personalities that evolve naturally. The dialogue fits the time period, and the descriptions of England’s South Downs shows a loving familiarity. There’s one incomplete thread involving a secondary character, but this is a minor flaw.

Readers should be forewarned that the pace is almost the opposite of what’s common in popular fiction, featuring long chapters and dense paragraphs, but the narrative is engrossing and Henderson is a natural storyteller who delivers a conclusion sure to bring tears.

Fans of family sagas such as Winds of War and Downton Abbey should latch onto Henderson’s richly explored lives of the Rutherfords.