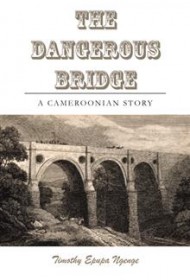 The Dangerous Bridge is a suspenseful tale set in Cameroon in the 1920s. Tribal loyalties and colonial influence are in conflict, and the desire for power leads people to turn against their own.

After serving in the British West African Frontier Force, James Walker Gray returns to Cameroon intent on working for the good of the native populace. He appeals to Ekema for help finding an assistant. (Ekema is a Mokpe man who spent so much time among the Germans that he prefers the name “Otto von Wilhem.”) Soon, he is introduced to Ikome, a young man who quickly takes advantage of his position, intentionally botching translations and manipulating tribal chiefs and Mr. and Mrs. Gray for his personal gain.

Ikome is corrupt to the core, insisting people call him “Frederick Lugard,” after a respected acquaintance of Mr. Gray, and view him as, if not actually white, the closest thing to it. When he finally gets his comeuppance, it feels long overdue.

The bridge of the title, built in 1909 by German plantation owners, literally towers over the natives below, one of whom has fallen from it to his death. That divide between black and white, have and have not, continually appears in the story and is further complicated by Ikome. Instead of being a Robin Hood, he takes only for his own gain and hurts people on both sides in the process.

Author Timothy Epupa Ngenge builds suspense effectively from page one. Culture, class and race all conspire to keep people from understanding one another, which creates room for corruption and makes that corruption harder to identify and ferret out. Ngenge’s prose mixes the literal story and symbols, such as the bridge, to good effect. Fans of Paul Theroux, especially his early novel Girls at Play, will appreciate the power plays and brutal consequences these characters face. But for a few repetitive phrases scattered throughout, The Dangerous Bridge is a finely crafted page-turner.