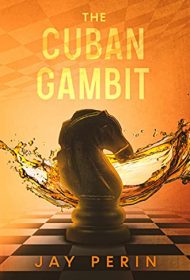 The third novel in Jay Perin’s One Hundred Years of War series (based on the Sanskrit epic The Mahabharata) continues the saga of three families’ struggle to gain control of the global oil market.

In the previous installment, The Manhattan Swindle, the Barrons, Kingsley and Sheppard clans joined forces to form a single company. Protagonist Lilah, who serves as CFO of the new mega oil corporation, is a member of all three families through a combination of blood, adoption and marriage.

Although married to Brad Kingsley, Lilah has never forgotten her first love, Harry Sheppard. Harry is also married, but he loves her back and remains her platonic protector.

Lilah’s idealism and refusal to listen to her elders antagonizes Kingsley patriarch Godwin, a former Supreme Court justice, and his stepbrother Temple, who is in his final year as U.S. president when the novel opens in 1986. The two men determine to bend Lilah to their will.

Meanwhile, Lilah’s battle for her company’s future takes her to India, Panama and Guantanamo Bay – and to a confrontation with an old enemy.

As in his previous novels, Perin offers dynamic characters and a gripping plot. Resourceful and headstrong Lilah and brave, loyal Harry are a beguiling power couple. The novel’s antagonists, including ruthless Godwin and loutish Brad, are equally compelling. A deeper dive into Temple’s psyche, however, seems necessary, as his shift from loving Lilah like a daughter to viewing her as an obstacle to be eliminated feels abrupt.

The novel’s shifting crises and double-crosses provide the same page-turning quality as its predecessors. The pace could be further improved by cutting some of the many dialogue-heavy scenes. For instance, Godwin and Temple repeatedly discuss their plan to use a figure from Lilah’s past against her; this lessens the impact when that person finally shows up.

Overall, however, The Cuban Gambit should satisfy fans of the series (newcomers should start with the first volume), leaving them eager for the next installment.