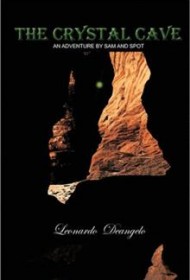 The Crystal Cave is a young adult adventure novel about a boy who fights off an evil witch with the help of magical beings.

While picnicking in a park with his parents, 11-year-old Sam and his dog Spot wander off into a cave. Though Spot is uneasy, Sam can’t resist going deeper inside and soon spies a glowing crystal. But as he reaches to pick it up, a giant dragon attacks from the shadows and kills Spot. Grasping for a way to defend himself, Sam throws the crystal at the dragon and the dragon vanishes.

Realizing the crystal is magical, Sam retrieves it and wishes that Spot were still alive Â¬– at which time Spot revives. As Sam and Spot turn to leave, a fairy appears and warns Sam that he’s in danger. She explains that the cave belongs to Melda, “the bad witch with no heart.” A century ago, Melda captured the crystal and put it in the cave, and now that Sam has found it and killed her guard dragon, Melda will try to exact revenge.

Over the next chapters, Sam helps a white witch try to defeat Melda, with the help of several supernatural allies. Each chapter introduces another battle and ends with Melda cowering and retreating back to her cave. As a result, the plot becomes formulaic, and very little suspense is engendered.

Though fans of match-ups between good and evil characters might enjoy seeing who wins the fight, the book’s writing flaws are likely to deflect that interest. The story is filled with grammatically incorrect sentences, redundancies and unnatural dialogue. Punctuation is sometimes missing and words are occasionally misspelled (including “hump” instead of “thump,” which creates an unfortunate meaning change). The book reads as if the author wrote stream of consciousness and never reread or edited his work.

These issues ultimately undermine the story, creating a challenging read for the young audience to which it’s aimed.