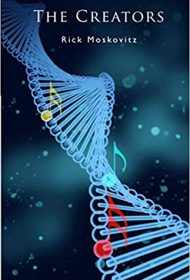 This third book in Rick Moskovitz’s intriguing, brain-teasing science fiction trilogy brings together characters from the previous novels in which a futuristic society can swap consciousness from one body to another.

The main plot here concerns Natasha, a young child in the first novel, now a teenager who is half-human, half-immortal. She believes there’s a secret message hidden in church music patterns that will reveal why and how mankind was created. This search for meaning takes her mind to a different realm.

A subplot concerns a band of runaway criminals who formerly ran Ganymede, makers of the powerful consciousness-swapping technology. Having all committed suicide and transported their minds into healthy young bodies, the group now lives on a remote island and faces dissension because goals have shifted.

Meanwhile, Lena, a journalist who has appeared in the other books, searches for answers about the mind-swapping experiments. In her quest, she tracks down former hackers and assassins who had opposed Ganymede and are now gathered in a farming community, trying to live in peace and quietly, to avoid any vengeance Ganymede’s former employees might seek.

The three storylines connect in a somewhat confusing ending. While the series’ first two books fit into the science fiction genre, The Creators includes what more closely resembles science fantasy as Natasha experiences musical visits to another realm. These passages are harder to believe than the science fiction, and the uncomfortable genre shifts between the two in this novel have major impacts on the storytelling.

Additionally, a life-or-death scenario involving a pregnancy, a plot device used in the second book, is repeated here in a less-effective attempt to increase readers’ emotional investment.

Even so, the writing is focused, intelligent, and often eloquent, as in: “Paradise was also now threatened by another kind of lust that had newly intruded upon his consciousness after decades of dormancy.”

This title is perhaps the weakest in the trilogy and is best read with the others, rather than alone. Overall, though, this series is thought-provoking and imaginative as it offers absorbing scenarios about what the future may hold.