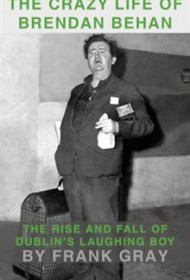 The very Irish Brendan Behan (1923-1994), like his contemporary, the very Welsh Dylan Thomas (1914-1953), was as much an American invention as of his own native land. Like Thomas, he followed the pattern of the wildly drunken and charismatic writer that had its origins in the internationally renowned Ernest Hemingway. As did “Papa Hemingway,” these writers traveled with an entourage that was part of their self-promoting style that made their personalities a part of their work.

This is not to say that Behan wasn’t an original. As Frank Gray details in his fluent and well-informed biography of the author of Borstal Boy (Behan’s autobiography, 1958), and two plays, The Quare Fellow (1954) and The Hostage (1958), Behan drew on his rough background in a divided Ireland, where he joined the Irish Republican Army and spent the better part of a decade in and out of prisons. And yet, as Gray shows, Behan showed a remarkable lack of bitterness and a tremendous sense of humor that made capital out of his foibles and failings. His gift of gab and literary genius redeemed what might otherwise have seemed a rather boorish life.

As Gray acknowledges, this is not the first biography of Behan, but it may be the best and most likely the most readable, given Gray’s engaging style and dogged research. He also has had the advantage of coming late, so to speak, to the game, at a time when subjects like Behan’s bi-sexuality are no longer verboten. For the most part, Gray just has to step out of the way and carefully describe Behan’s antics, as well as his mastery of language and theater business.

A phrase in Gray’s acknowledgments suggests he has not told all, since he refers to “things better left in the dark.” Really? How can any reader let that remark slide? At any rate, as a lively narrative presented with the practiced eye of seasoned journalist, The Crazy Life of Brendan Behan does not disappoint.