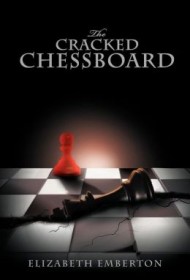 Everybody wants to be king in Elizabeth Emberton’s thriller, The Cracked Chessboard. In this debut novel, Emberton imagines a never-ending game of one-upmanship in a British hierarchy where politics and plunder go hand in hand.

Emberton details the downfall of Sir Dennis Deane, once a rich and influential chairman of the Mercia Constituency, now a stroke patient abandoned in a nursing home. Despite his sad circumstances, Deane is not a sympathetic character. We may wonder what brought the powerful figure so low, but we also suspect from his acidic inner monologue that whatever it was, he may have deserved it.

The road to Deane’s ruin is paved with accusations of corporate theft and money laundering, as his export business appears to benefit a little too much from his cozy relationships with government contacts. Emberton takes us to the very offices where the dirty deals are done and gets us asking: Are these bureaucrats really diverting money from health services to fund their own luxury projects? Could they possibly be making money by blocking desperately needed services? Readers may share Emberton’s outrage at first, but it’s hard to maintain a position on any particular character when many of them are known more by position—Chairman, Chief, Officer—than name.

Emberton’s storytelling is most compelling when she takes the tale out of the office and into the world. Film-worthy action scenes, for instance, capture the fear and chaos that follow a bomb threat at a political rally. Similarly, characters that exist outside the political power structure are the most nuanced, like Deane’s animal-activist daughter, Annabel, who inherited her father’s determination, but prefers sharing the wealth to hoarding it.

As a longtime National Health Services Officer and ardent patient advocate, Emberton knows the system inside and out. Her attempts to bring it to life in narrative form often succeed, but overall, The Cracked Chessboard delivers mixed results.