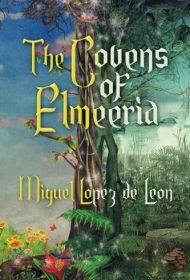 Fantasy novels often deal with power struggles, be they literal skirmishes between rival kingdoms or something a bit more magical. In The Covens of Elmeeria, author Miguel Lopez de Leon combines a bit of each with smart pacing and twists that readers will never see coming.

Crown Princess Nia has a good life in Elmeeria. She takes meetings with her father, King Roo, in hopes that one day she’ll rule the kingdom, but her mother, Queen Bloom, would prefer she marry well and consolidate the family’s power.

Meanwhile, Nia and the Queen share a dangerous secret: They possess magical powers, a gift that could be a liability in Elmeeria, where witches are feared and kept outside the community’s fortified walls. Nia covertly trains with her mother in the use of their shared magical skills. (Initially, Nia can use her hands like a sort of improvised flashlight; when she’s in crisis, the fuller nature of her powers become evident.) And when a banquet held in Nia’s honor is ambushed by a rival kingdom, she knows where to turn for help, even though it may prove to be a costly cure.

De Leon sets this all up with casual pacing, yet layered foreshadowing throughout keeps us curious as to what’s coming next. When Nia tries to rescue her family with the help of the forest witches, a group of fairies, and the Dree (watery beings who can change shape and constitution), the action is tightly choreographed and exciting. And a revelation about someone close to Nia in the midst of the excitement comes as a genuine shock, although it’s hinted at early in the story.

Artfully mixing fantasy and the supernatural, The Covens of Elmeeria would be well-suited to readers on the younger end of the YA spectrum who are fans of either genre. It’s a fast-paced experience that will likely leave readers hungry for a sequel.