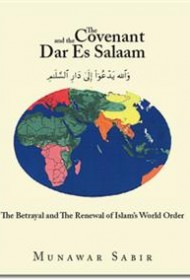 In The Covenant and the Dar Es Salaam (Dar Es Salaam translates to “The Abode of Peace”), Munawar Sabir, a medical doctor and a fellow of the Royal College of Surgeons of Canada, examines the nature of covenant in the Qur’an while offering a report card of sorts on how well Islam around the world is abiding by its arrangement with Allah.

What exactly does Sabir mean by covenant? “There is an implicit assumption in the Qur’an,” he writes, “that there exists an agreement between Allah and his creations…in which Allah proposes a system of regulation for the guidance of man.” This pact is found in 37 commandments that define Islam, “not only as a set of beliefs but also as a body of actions that reveal the inner convictions of the believer.”

In three parts which provide copious quotes from the Qur’an along with Sabir’s interpretation of the text, the author contends that the crises many Muslims face around the world today–from economic hardship to war to political infighting to acts of humiliation from the West–are because of blatant disregard of Allah’s laws.

Sabir is an intelligent and opinionated writer; yet, at nearly 500 oversized pages, the book seems overly long with much repetition that could have been eliminated or condensed, including his examination of complicity between East and West concerning 9/11 and its aftermath. There are also many typographical errors, and the book could have been better served with a more well-defined introduction establishing a concrete thesis. Moreover, many readers–non-Muslims and Muslims alike–may be put off by his definition of a Circle of Evil, a collection of faiths and countries (Western and Islamic) that he sees are working with Satan in violating Muslims around the world.

Still, The Covenant and the Dar Es Salaam is a provocative exegesis of the Qur’an and provides some insight into the thinking of many Muslims today.