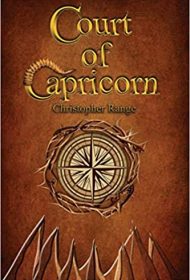 Range’s cast of characters is based on the zodiac’s 12 signs. Capricorn is the powerful “Lord of the Earth” and ruler over the “solid state of things,” whose court is an awe-inspiring city of gold. Capricorn invites the other three cardinals – Aries, Libra, and Cancer – to his court to celebrate the coming-of-age of his adopted daughter, Virgo. The rest of the royal family is also in attendance: his son, Taurus; Cancer’s son Scorpio; Cancer’s counsel Pisces; Libra’s son Aquarius; Aries’ son Libra; Aries’ “right-hand man” Sagittarius; and Gemini, “messenger of the 12.”

What follows is a reunion rife with philosophical musings, modern pop culture references (at one point, Aries announces his arrival with a catchphrase from I Love Lucy) and not-so-subtle parallels to Christian dogma. Capricorn’s true intent in inviting his guests soon becomes clear, and the attendees’ conversations and squabbles quickly take on a deeper meaning.

Written as a play, the story consists mostly of long stretches of dialogue between characters arriving at Capricorn’s court. As the narrative evolves, it explores epic quandaries of human existence and Western religion, using plentiful tongue-in-cheek humor.

Admirably, the characters are imaginative, portrayed with their own foibles and quirks. Sagittarius, for example, is depicted as a gunslinger with a wry wit, while Gemini offers a string of asides that include references to Kanye West lyrics.

These humorous touches and nods to modern culture don’t lighten the book’s sheer density, however. Readers must piece together the complex family dynamic and mythology from conversations, and all the dialogue and musings can make it difficult to keep the main narrative in focus.

Readers with an interest in philosophy or the zodiac will find rewards here. Many, however, will find this a heavy lift, wishing they could see the dialogue-laden piece played out on the stage rather than the page.