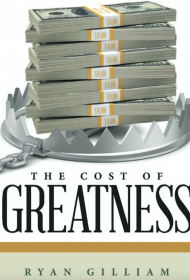 Ryan Gilliam, former cornerback for the University of South Florida, had more than football on his mind when he graduated from college. He wanted to attain “greatness.” Indeed, by his 30th birthday, Gilliam was a self-made millionaire, but he wanted more. In The Cost of Greatness, he shares the grit and the joy of birthing a dream and the struggle of learning to be content.

Gilliam married his wife Alysia at the age of 22. With $10,000 of their own money that they parlayed into a $50,000 business loan, coupled with great willpower, they used Alysia’s credentials as a board certified behavioral analyst to start Pediatric Behavioral Services, a company that helps children with autism and other developmental disabilities. In less than a decade, the company became a multi-million dollar practice, but Gilliam wanted more: a bigger company, more money. Here, he explains, in a non-preachy way, how his achievements failed to satisfy until he learned to follow God’s plans for his life rather than his own, and he offers business tips as well.

Gilliam hopes to “encourage entrepreneurs” by sharing what made him successful (such as doing whatever it takes and never saying “no” to a client), and his tips on handling employees are excellent, from hiring and firing to maintaining morale. At the book’s end, Gilliam includes a section on business basics; unfortunately, it’s little more than an outline and a brief glossary of terms. A more thorough look at these points would be welcome.

Shining throughout is Gilliam’s quiet example of using setbacks and mistakes as a springboard for inner growth. His reactions to life’s negatives teach a greater lesson than his advice, showing that the ultimate cost of greatness for a Christian is the surrender to God’s will.

Gilliam is an engaging writer who knows how to move his story along. Young entrepreneurs and business owners, especially of the Christian faith, will enjoy the ride and learn from Gilliam’s rise to greatness.