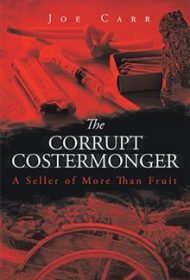 In this crime novel, a United Kingdom police officer receives a tip that leads him into a conspiracy involving illegal immigrants, drugs, police corruption, money laundering and possible terrorist activity.

When Detective Sergeant Ron O’Neill of the Birhampton Police gets a call from a low-level criminal named Errol George, he’s unprepared for the far-reaching revelations that follow. Errol tells O’Neill of a drug ring headed by Dwaine Sutton, a fruit and vegetable vendor, a “costermonger” who sells his produce from a marketplace stall (in Victorian times, costermongers sold their wares from handcarts). Dwaine and his brothers are selling heroin, smuggling in immigrants in wooden crates with drugs tucked in their jackets. But, as the sergeant soon finds out, Dwaine’s criminal activities are only the first link in a criminal chain that may lead all the way up to a member of the British parliament.

The author seems well-versed in the inner workings of a police station; however, he spends too much time on police and court procedure (which is often too insider for someone unfamiliar with the U.K. system) and too little time on crafting a compelling story. The novel needs more conflict and character development. For example, readers learn that Ron O’Neill is still mourning the death of his wife three years earlier, yet they never learn the circumstances of her death.

Meanwhile, the operation to take down the criminals is described with flat writing that conveys minimal excitement: “DI Murray, accompanied by Ron O’Neill, Des, and Diana approached the group. As they did so, the uniformed officers of the SPG and the five ATS officers together with Inspectors Massingham and Lewis also moved forward…”  Copyediting issues (missing periods, misplaced quote marks, etc.)  also prove distracting.

The author’s conceit in this modern-day tale of corruption holds promise. With more attention to building his story and characters, he could attract a wider audience and provide some first-rate insight into the police operations in the U.K.