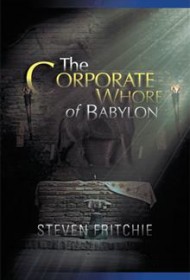 As The Corporate Whore of Babylon opens, Los Angeles Police Department homicide detective James Gladd isn’t even sure the death of tire tycoon William Babble is a murder as he surveys the scene in a Malibu bedroom.

But when an autopsy finds a scarce drug in the mogul’s system and a needle mark on the back of his scalp, Gladd has a tangled murder case on his hands. His job will quickly become complicated by a shadowy cult based in Idaho and a menu of suspects including four competitive sons, a hottie secretary, a calculating lawyer, a houseful of servants and a boardroom of wily corporate executives.

A mysterious caller sets Gladd on the trail of an Old World Order cult in Idaho. For more than a century this secret society has been conspiring to seize control of the world’s money and replace Christendom with their sinister apocalyptic theology.

When Gladd is captured by the cult, the novel plunges into deep, dark, diabolic depths that will titillate conspiracy theorists and keep tinfoil hat-makers in business.

Unfortunately, Gladd isn’t as engaging as Dan Brown’s Robert Langdon, who kept readers focused through the equally labyrinthine plot twists in The Da Vinci Code. The characters are two-dimensional, and the dialogue can be clunky. Nevertheless, author Steven Fritchie imagines a frighteningly nefarious cult and ushers the reader along the twisted path without too much frustration.

It’s hard enough to follow an intricate plot without typographical landmines interrupting the trip. The Corporate Whore of Babylon is for readers who like complicated international conspiracy yarns and can overlook its obtrusive technical gaffes.