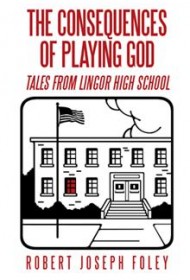 Mixing broad satire with magical realism, Robert Joseph Foley’s novel deconstructs one American high school piece by piece, leaving it broken and on the cusp of a disaster. As it shows itself in the course of the narrative, Lingor High School is a barely functional place where faculty and administration clash interminably and students meander irrelevantly in their wake.

Unfortunately, the author starts off by displaying one of his faults: heading off in too many directions at once. We open, not at the school, but with a father taking it on himself to rescue his son from “the ever-increasing threat of puberty” by overseeing his physical mutilation. Though possibly intended to illustrate an older generation’s sacrifice of a younger one on the altar of its own ambition (and thus the consequences of playing God), the story makes a cumbersome fit into the subsequent travails of Lingor High.

Yet once we get to school, the narrative continues in ways almost any teacher (and more than a few students) should appreciate. Petty academic politics drive faculty and administration hopelessly apart while plots and counterplots rage and the student body glumly soldiers on.

Symbolized by a smoking, rusty old Peugeot diesel sedan that somehow survives long enough to be passed from one generation of teacher to the next, Lingor High somehow survives as well, belching its way through endless squabbles, insanely wrong choices, and the unexplained suicide of a star student. Finally, it all comes to head in a game of “donkey kong,” in which faculty and students shoot baskets from the backs of heavily sedated beasts of burden.

Ending up in a courtroom bursting with paranoia and muddled thinking, the novel probably has too much going on for its own good. Despite its faults, though, its insightful and comic take on the American high school and, by extension, American education in general strikes many of the right notes with verve and precision.