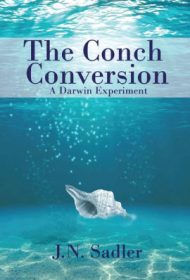 In the 19th century, authors explored the dangers of scientific caprice with novels like Mary Shelley’s Frankenstein. In The Conch Conversion: A Darwin Experiment, the first in a series, author J. N. Sadler follows in their footsteps, positing an amoral scientist who creates a new species.

While alive, scientist Dr. Warren Wild combined human beings with conchs, believing that humanity’s future lies underwater as global warming causes the seas to rise. Wild is now deceased, but his human-mollusk hybrids live on, building a society near a volcanic island. Readers follow an expedition to the island, led by Horace Nordick, a marine biology professor and part sea snail, that first appears to be a research mission. The novel later reveals that the true aim is for a human woman to mate with one of the hybrids. As the story unfolds, readers learn other startling twists.

Throughout, the story questions atheistic values, repeatedly stating that Wild “worshipped” Darwin. “Men were now worshipping men and women instead of a deity, or called money the new God,” Sadler writes. “What would the new world order believe in? Survival, nothing more.”

Some scenes make for squeamish reading, including horrific deaths and a character’s rape by one of the hybrid creatures. Additionally, the author’s treatment of science is sometimes frustratingly cursory; for example, while a research ship has a robot pilot, there’s no discussion of what that might entail.

Finally, the premise begs the question of why conchs? If the goal is to create aquatic humans, wouldn’t the more logical step be toward a marine mammal like dolphins, rather than sea snails, an animal so radically physiologically different to human beings?

Readers who believe science has gone too far may revel in some aspects of the novel, and there are effective elements of an adventure tale in this globe-spanning story. But ultimately, many readers may have difficulty buying into this conceit.