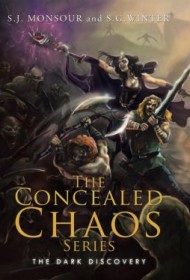 This novel—the first in a projected series—is a classic sword-and-sorcery adventure in the vein of master storytellers Robert E. Howard, Fritz Leiber, and Clark Ashton Smith. Although published in 2015, it could have easily found an audience with early-to-mid 20th century readers. Powered by heroic deeds, relentless pacing, adventures steeped in the supernatural, a little romance to spice up the storyline, and an ever-present sense of breathtaking wonder, this is timeless sword-and-sorcery.

Set in the realm of Tannrias largely on the continent of Ravlinar, the storyline revolves around an evil conspiracy set into motion by the seemingly immortal leader of the Cleric Order, the ruling religious group of most of the mainlaind cities. Unbeknownst to the diverse inhabitants of Ravlinar (dwarves, humans, elves, ogres, etc.), the Cleric leader is raising a dark army; nightmarish creatures of legend are inexplicably reappearing in remote locations. United by fate, a group of misfit heroes—including a Gryphon-riding human with a tragic past; a master blacksmith dwarf; and a shape-shifting witch—join together in an attempt to combat the spreading darkness.

A common pitfall in such storylines is for the writer to focus too much on action while neglecting backstory and world-building. In this novel, however, the balance is perfect. Readers will clearly understand the realm, its history, and the unfolding plot without the story ever slowing from its pedal-to-the-metal pacing.

The only minor flaw is in the characterization. Although the characters are adequately described, they’re all a bit two-dimensional and fall a little too easily into fantasy stereotypes. But that said, it’s all about the adventure, and the characters, although not particularly memorable, are described well enough for the story to work. Fast paced, action-packed, and fun—this is an utterly readable fantasy.