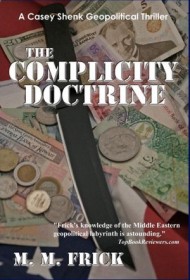 Casey is still an analyst at private consulting firm Intelligence Watch Group, a geopolitical think tank that assesses global threats. In this alternate reality, the United States recently bombed Iran’s nuclear facilities and the political landscape in the Middle East is increasingly hostile.

Also returning is Susan Williams, the sharp-tempered analyst who recruited Casey in Open Source. Susan is concerned about her friend Mariam Fahda, an analyst at the Congressional Research Service. After Mari writes a report on an Islamic insurgent group operating in Yemen, she discovers that her report was changed substantially before delivery to the U.S. Senate. That’s when shadowy operatives start trying to assassinate her.

Casey and Susan are putting the pieces together at a Manhattan deli when an explosion rips it apart. Minutes later, bombings outside St. Patrick’s Cathedral and Manhattan’s Central Synagogue throw New York City into chaos.

Frick’s thrillers remain heavy on debate and light on action, but they’re just as exciting as their competitors in airport bookshops, and maybe even a little smarter. Readers who enjoy international suspense in the vein of John le Carré or Robert Ludlum will tread familiar ground in Frick’s post 9-11 universe.