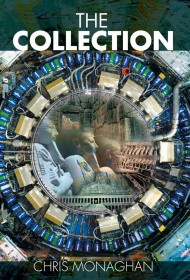 Brilliant scientists don’t always make the best travelling companions. In his dimension-warping fiction debut, Australian author Chris Monaghan puts together a crew of such scientists and sets them working to reverse a particle accelerator accident that threatens the very fabric of the known world.

The action starts in Geneva, Switzerland, in 2015, where a group of scientists works feverishly to avert disaster at the Large Hadron Collider. To their horror, they become trapped inside the activated accelerator. What follows is a confusing series of dimensional shifts attributed to a wide variety of phenomena. Monaghan’s scientific explanations of time travel clarify little about the team’s ability to complete its mission, which involves a whirlwind tour of the past, where they must collect certain artifacts from different eras in order to return home.

The future and past collide as the bickering crew meets fierce Maori warriors in New Zealand, visits the Temple of Amun in Egypt, and even travels to the Roman Forum in 24 B.C. before returning to California circa 2020. It feels strange to follow their archaeological quest when it’s peppered with futuristic phrases like “massless environment” and “tau neutrino meter.”

Potentially engaging action and drama scenes – everything from sword fights to medical emergencies – should keep the story moving, but Monaghan’s heavy reliance on passive voice and stilted dialogue weighs things down. Inconsistencies also distract from the storytelling, as when archaeologist Bryce Bannigan in one scene discovers a severed arm that morphs into an armless body in the next.

The Collection is a story in search of an audience. Science fiction fans may enjoy puzzling out Monaghan’s particular philosophy of physics; historical novel buffs will thrill to the accurate period settings; and fantasy lovers might enjoy the magical elements that arise among the science. If you’re a fan of all three genres, by all means join Bryce and crew on their grand voyage. Just know that the trip is a little rocky.