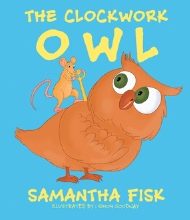 Two new friends explore the workings of clocks and the art of telling time in Samantha Fisk’s picture book The Clockwork Owl.

Herbert, a mouse, lives in an old abandoned house—alone, he thinks—until one day a mysterious voice calls out to him. Its source is a mechanical bird named Clockwork Owl, a long-dormant timekeeping device that has suddenly awakened. Clockwork Owl educates Herbert about time and its measurement, and Herbert returns the favor by winding the owl with a key as needed. The book ends with the two friends living happily together.

The story has several strengths, including the suspense in the beginning as Herbert feels like he’s being watched, and Herbert’s innate sense of time as he answers the owl’s questions through the only context he understands. The owl asks: “When’s breakfast time then?’ ‘When I get up,’ said Herbert. ‘What time is that then?’ asked the owl. ‘When the sun comes up,’” said Herbert.” The characters are both likeable, particularly Herbert.

Unfortunately, the story also has many shortcomings. While the owl often asks Herbert to wind him up, these moments don’t seem to correlate with the owl’s awake and dormant periods. In one passage, for example, the owl springs to life vividly after Herbert winds him up, only to quickly fall back asleep. While asleep, the clock still announces the time on the hour. There’s never any explanation about this inconsistency.

The book also harbors many punctuation and grammatical errors (“all of a suddenly”) and clumsy exchanges like this one, from early in the book: “‘W-who said that?’ he said nervously. ‘From me,’ hooted a voice.”

Most importantly, the book’s purpose is unclear. Is it meant to teach readers how clocks work? Or to teach them how to tell time? The story is too unfocused to accomplish either task.

The concepts attempted here hold much potential for young audiences. But due to the flaws mentioned, this story ultimately falls short.